​This fellowship began as a vision of a caring, Bible-centered church. Meetings were held in October, 2000 to determine interest in the Winchester area. Services began in November. A constitution and accompanying bylaws were adopted in June 2001.

Also in June 2001, Pastor Robert Stainback and his wife attended the annual meeting of the National Association of Congregational Christian Churches held in East Lansing, Michigan on the campus of Michigan State University.  On June 23, 2001 the church was formally accepted into membership in that Association.

The church is also a member of the Evangelical Association of Reformed and Congregational Christian Churches. This Association is a voluntary association of churches, ministers and believers networking together to further the cause of our Lord Jesus Christ. Pastor Stainback has served on the Board of Directors for this organization and is a former national vice-president.

That church lasted until 1977 when an arsonist burned the church to the ground along with four other churches. Talk to our older members and you will think this fire was just yesterday. In 1990 we dedicated our current building on Middle Road. Member Monte Conner was a major force in building the new church and in dealing with all the related problems. Although the congregation wanted to name our fellowship hall after Monte, he demurred and it wasn't until Monte passed away in 2005 that we were able to christen Conner Fellowship Hall in his honor. 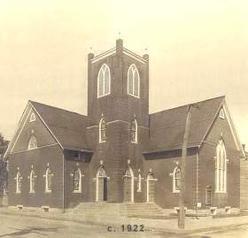 This fellowship comes from a merger of two churches in 2005. The history listed below traces the paths of both churches which form the new fellowship.​

In the past twenty five years we have had four ministers. Reverend David Byers joined us in 1998 and retired in 2005.  Before that Reverend Roland L. England was with us for five years.  Reverend England left to plant a new church over near where US 340 crosses the Potomac river.  Prior to that, Rev. Paul Marsteller was our pastor for 17 years..

If you trace back all sixteen ministers before Rev. Marsteller you arrive at our birth in 1909. Starting in 1908 Dr.  W. T.  Walters began preaching one Sunday a month in Winchester.  The congregation numbered seventeen members (yes, including women for you history buffs) when the church at 20 West Cork Street was dedicated.